This document describes a weakness in Bitcoin Design that reduces the security of SPV proofs and therefore SPV Wallets.  The weakness was discovered by me on August 2017, but during the responsable disclosure process I learnt it was previously known by some prominent members of the Bitcoin Core team. Using this weakness an attacker can create a valid SPV proof for a fake payment to a victim that is using a SPV wallet, the payment amount being an arbitrary number of bitcoins, and trick the victim into accepting this payment as valid.  Happily, exploiting this bug requires brute-forcing between 69 and 73 bits (depending on initial investment), each operation being a double SHA2, and there are very simple probabilistic protections that SPV wallets can implement easily. For example, an attack can be carried on with an investment of 3M USD (*). It is assumed that most SPV wallets will be vulnerable to this attack. Also vulnerable are automated systems that accept SPV proofs (such as the Blockstream Elements sidechain in non-federated mode and the RSK Bridge contract). A simple patch which it neither a soft nor a hard fork can prevent the attack described. Also, a second attack that forks the Bitcoin blockchain is presented, requiring the brute-forcing of 225 bits, so it’s only of theoretical interest.

Bitcoin Merkle tree makes no distinction between inner nodes and leaf nodes. The depth of the tree is implicitly given by the number of transactions. Inner nodes have no specific format, and are 64 bytes in length. Therefore, an attacker can submit to the blockchain a transaction that has exactly 64 bytes in length and then force a victim system to re-interpret this transaction as an inner node of the tree. An attacker can therefore provide an SPV proof (a Merkle branch) that adds an additional leaf node extending the dual transaction/node and provide proof of payment of any transaction he wishes.

Crafting a Transaction-node in 2^72 operations

The following diagram shows a 64-byte Bitcoin transaction, and how this transaction is split into two 32-byte chunks.

First the attacker proceeds with a second half of T. In the second half, some fields are fixed, some free and some partially free. The LockTime value is also partially brute-forced: the attacker makes sure the brute-forced uint32 is between 500000000 and 1501843940 (today as a Unix timestamp) or between 0 and 479042 (the current block height). This implies that the LockTime has elapsed. The combined numerical range amplitude is 1002322982, which is close to 230. Therefore, he only needs to bruteforce 2 bits of the LockTime. The higher bits of the Previn tx output index are brute-forced so the index is always less than 32768.

The value is only partially brute-forced. From the 64 field bits, 35 bits are chosen freely (because the attacker has 2^36-1 satoshis, so 35 free bits can represent any number lower than the amount), while the 29 MSB bits must be zero. If the attacker has more BTC, he can reduce the number of bits to brute-force by consuming more BTC in A. Note that the amount is not lost: as the attacker is a miner, he can collect the transaction fees and consume the transaction output and recover all the funds (however creating the anyone-can-spend output and a high-fee transaction T will put the attacker in the risk that another miner reverts the blockchain to re-mine this block and collect both fee or output in T). The attacker may mine several blocks in-private (selfish-mining) to prevent rollbacks.

The attacker tries to create a fake transaction F whose transaction ID matches this second half of T. An easy way to do it is to create a fake transaction having one output for the fake payment to the victim, and scan all possible values for the lock_time field; when the space is exhausted, the input script is slightly modified and a new 32-bit space of lock_time values is created. Again, an AsicBoost-like technique can be used to save one message-scheduler of the double-SHA2 operation.

The total number of bits to brute-force in the first stage is therefore 72 bits.

In this second stage, the attacker tries to brute force the first 32-byte half of T. Let Q be the tx output index chosen in the first stage. He creates a huge number of transactions consuming the input A and having Q outputs each. The last output will be consumed by T. The attacker makes small changes to the tail of the transaction and re-hashes to obtain the id, therefore creating new transaction ids requires only two SHA2 compressions (one to finalize the transaction hash and the double-hash). The lock_field can be used to iterate. The attacker tries to find a transaction whose transaction ids end in the 5-bytes tail chosen in the first stage. Let’s call this transaction P. This transaction consumes an output controlled by the attacker having A funds. Approximately 2^40 operations will need to be performed to find P.  An AsicBoost-like technique can be used to save one message-scheduler of the double-SHA2 operation.

The total number of bits to brute-force in the second stage is therefore 40 bits.

Interestingly, the brute-forced half of the transaction created in the first stage can be reused as many times if the second stage is re-done. The attacks can be carried out at different times, in different blocks. Therefore, following attacks require only brute-forcing 40 bit each. If the number of outputs in P is 33K, the amortized cost of the attack corresponds approximately to brute-forcing only 65 bits. A final transaction E is added in the same block to consume the output of T and recover the funds at risk. 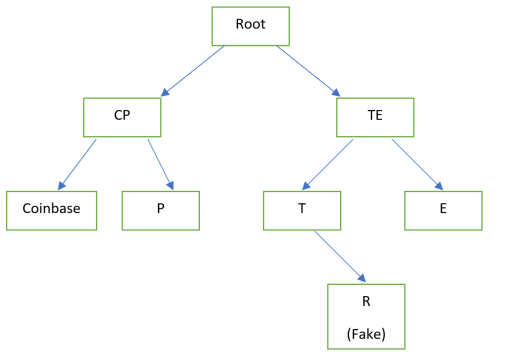 The Cost of the Attack

The technology required to build a custom ASIC that performs the brute-forcing of the second stage is very similar to the technology used for Bitcoin miners.

A state-of-the-art Bitcoin miner reaches 14 TH/s and costs $1300 USD. An attacker that buys 1000 units, investing 1.3M USD in hardware, can scan a 72-bit space in 4 days. An additional 1M-10M USD for ASIC chip design and tape-out may be required, depending on the node density. If a chip that can accomplish a programmed pattern match search (instead of zero prefix search) already exists, the design/tapeout costs are saved.

Therefore, under favorable conditions to the attacker, the attack can be profitable if the attacker can cheat one or more users for 1.3M USD or more in total. As any rational actor receiving large amount of BTC will double-check the reception using a full node, only autonomous systems relying on SPV proofs (such as the Elements blockchain and the RSK bridge) may suffer from these attacks.

The attack presented in this document is not optimal: there are several trade-offs than can be made to reduce the number of bits to brute-force increasing other variables, such as initial investment. Locking twice the money in A allows the attacker to reduce the cost in mining hardware to a half, etc.

An (expensive) attack to partition Bitcoin

The same vulnerability allows an attacker to fork the Bitcoin blockchain in two without reconciliation, however this attack costs 2^240 double SHA2 operations, so the attack is impractical. The attack requires the attacker to mine a block A with only one specially crafted coinbase transaction of 64 bytes, and create a competing block B with 2 transactions where the pair of transactions IDs in B hashes to the coinbase transaction in A. Both blocks are broadcast simultaneously to different parts of the Bitcoin network. Therefore approximately 50% of the network receives A and the other 50%, B. The two sets of transactions in A and B are created so that they consume different UTXOs and/or create different UTXOs, and therefore both blockchains are valid, but incompatible.

This method has a drawback: the coinbase transaction may be large, so the method requires non-logarithmic space. If the coinbase transaction is larger than 64 bytes, we could show as evidence only the last a SHA2 mid-state of the first SHA2 application to the coinbase transaction and the transaction length in bytes: with these two field the coinbase id can be reconstructed, because SHA2 embeds the bitlength in the last message block. This allows the verified to effectively differentiate between a 64-byte node and the coinbase transaction. The security of this constructions is weaker and relies on the infeasibility to find free-start SHA2 pre-images. To complicate things, it is still possible (for the next 145 years) that a malicious miner includes a coinbase having exactly 64 bytes.  Therefore, the SPV client must also perform a special check in case the coinbase is exactly 64 bytes in length: in this case it must verify that the previn field contains 256 zero bits (of which 216 are stored in the left half). It’s currently infeasible to obtain a pre-image of a hash digest having 216 zero trailing bits.

Yet another solution that keeps the logarithmic-space constrain for Merkle-proofs is to present an inclusion proof for the right-most transaction ID. In case the number of transactions is not a power of 2 (a full tree), this id appears duplicated at the last two nodes of the tree, so that the tree height can be inferred. A complete solution would require soft-forking Bitcoin to prevent blocks having a full tree, which is nasty.

To summarize, the most space-efficient solution without a soft-fork would be hybrid: show inclusion proof of the rightmost tx id branch if the tree is not full, else the coinbase (showing mid-state and length) if length is greater than 64 bytes, or else show the full coinbase transaction.

A simple soft-forking solution is to invalidate blocks having transactions of size equal to 64.

Another soft-forking solution is to require that a new field “depth” requiring 4 bits is embedded in the block version field. This new fields should specify the Merkle tree depth minus one. By using 4 bits, a a tree of depth 16, containing up to 65K transactions can be specified. Full nodes much check that the actual tree depth matches the value of “depth” given. SPV nodes can check that the “depth” field matches the Merkle branch length received.

A hard-forking solution is adding a prefix to internal nodes of the Merkle tree before performing node hashing and adding a different prefix to transaction IDs and then also hash them. Ripple ([2]) uses a such a prefix system.

Special thanks to Juliano Rizzo and Matias Marquez from RSK Labs R&D for helping me reduce the attack complexity. Also to Gregory Maxwell for discussing the best way to correct this problem.

(*) The amounts in USD described in this document were computed at when the weakness was discovered and now they may differ significantly.

Bitcoin Core Report Contact Date:  August 8th, 2017 (from the interactions we learnt that is was already known to some Core developers)

June 13th, 2018: Luke Dashjr contacted me and told me he already knew about this weakness. I trust Luke’s word that this is the case, and as I said in the first paragraph, the weakness was already known by some developers. But I still don’t understand (1) why so many people knew about it  but underestimated it badly, (2) why there was no attempt to fix it.

This entry was posted on June 9, 2018, 8:00 pm and is filed under Uncategorized. You can follow any responses to this entry through RSS 2.0. You can leave a response, or trackback from your own site.